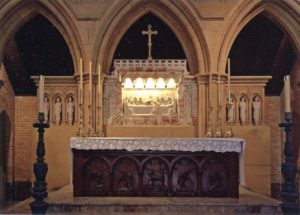 The Sanctuary in Christ Church is very beautiful as befits this focal point of the Cathedral. The eastern wall was pierced in 1910 and the three stone arches were added. They were a gift from Mr Hudson Berkeley. The alabaster reredos which was a gift from Miss Lillian Nicholson, was added in 1938 and is similar to the reredos of the Last Supper placed by King Edward VII in the parish church at Whippingham on the Isle of Wight, to commemorate the life of his Mother, Queen Victoria. The great east window was the gift of the Parnell family and Miss Emma Kemp.

The High Altar is made from Australian Rosewood , the timber for which was felled in the forests out of Corranbong. The five carved panels depict the Paschal Lamb in the centre and angels kneeling in attitudes of prayer on either side. The altar is a Memorial to Mr Joseph Wood.

The marble sedilia was designed by Mr Castleden and given by the Parnell family.

The Standard Candlesticks which stand in the Sanctuary are the oldest treasures in the Cathedral and were installed by the Parishioners to mark the incumbency of Dean Horace Crotty, a much loved Dean. They are the work of Anabale Fontana, made about 1570 and came originally from a Carthusian Monastery out of Milan. The candlesticks are bronze and heavily marked with masks, cartouches and medieval figures. The Sanctuary Lamp is a memorial to the 9th Dean, Norman John Blow.