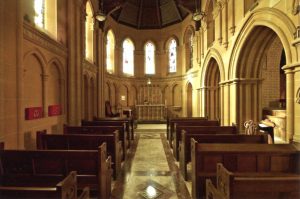 On the north eastern side of Christ Church is the Warrior’s Chapel, a Memorial to the men who lost their lives in the First World War. The Chapel has been said to represent “a sacrament of praise and thanksgiving, a selfless eucharist in stone and marble, commemorating the hosts of the young slain who, in the Great War, went out to die for something that they loved.”

The building of the Chapel was made possible by the generosity of the people of the time, the principal benefactors being Mr Hudson Berkeley, who donated the cost of the fabric of the Chapel, Commander Gardner who gave the marble altar and Mr Parnell who gave the marble paving and the cedar panelling which leads to the Chapel. Many other people from Newcastle and the Hunter Valley contributed to the creation of this chapel. The Chapel was designed by the Architect, Mr F G Castleden and opens off the north ambulatory after passing through the undercroft of the organ. The Chapel is 14 x 5.5 m and is 15m high. It is graced by 13 beautiful windows, all by Kempe & Co of London and telling the story of service and sacrifice in the light of an offering to Christ. The windows are:

In the five central windows above the altar the windows tell of the struggle towards light against the forces of darkness and evil.

9. St George (The Patron Saint of England)
10. St Michael (The Warrior of Heaven)
11. The Prophet Micah
12. St John the Evangelist (who brought the message of peace and brotherhood)
13. Our Lord is the central window and the message: “Let all nations bow before Him”

The stone carving in the Chapel is the work of F McCowan of Leichhardt. In the arches on the western wall are carved the insignia of the Navy, the Army and the Flying Corps. The string course around three sides of the Chapel contains Laurence Binyon’s famous lines and is decorated with fern leaves, oak leaves and Flanders poppies. The arched heads of stone above the altar enclose thorn leaves, vine leaves and passion flowers and the various bosses are carved with oak leaves and laurels.

The superb ceiling is of cedar with eight carved angel corbels which are the work of Mr Arthur of Newcastle. The lights of the chapel descend from these corbels.

The altar is of Australian marble with arches and columns at the front and sides. The 14 terra cotta Tinworth Panels which form the reredos depict the closing events in Christ’s life and are works of great beauty. Purchased during the incumbency of Dean Henry Archdall, the panels were modelled (at the turn of the century) by George Tinworth, the famous modeller for Doulton Potteries. The steps to the altar are of white, black and red marble. The significance of the steps and their symbolism in Christian life is that:
The white step represents the mirror of conscience and the clarity with which it reflects the offence of the penitent.
The black step represents the gloom of contrition.
The red step reflects the fervour of new resolution and the glory into which the pardoned penitent passes under the guidance of God.

On the southern wall, recessed into the masonry, is the Memorial Shrine in which the red light of remembrance burns and in which the Book of Gold was intended to rest. Above the shrine is the bronze crucifix in which the Christus is crowned with the Imperial Crown as the King of Sacrifice and the inscription carved in stone:

Hallowed in Christ
Be the memory of the
Brave men and women
Who died in the Great War
For the freedom of the world
They shall yet stand
Before the throne
An exceeding Great Army
And in the last Muster
There shall be found
These our own Well-beloved.

On the western wall there are many interesting things. In the centre arch is a small white round stone, carved with the shape of a Canterbury Cross. This stone was sent to us by the Dean and the Chapter of Canterbury Cathedral in Kent for inclusion in the fabric of this Chapel. It is a piece of stone from which Canterbury Cathedral was built. Below this stone is the pierced bronze shrine in which the Forster Lamp of Toc H Australia is kept. This lamp was given to us by the Governor General, Lord Forster, and is the lamp from which all other Toc H lamps in Australia were lit. Below this shrine is the Foundation Stone of the Chapel which was laid by Lord Forster and in front of it is the Forster Monument. This is a life-sized bronze of Lord Forster’s son, Alfred, who died of wounds in the Great War, and is a replica of the bronze in the Church of All Hallows, by the Tower of London. The Monument was given to us by Lord Forster and it bears the inscription, “Their name liveth for evermore.” 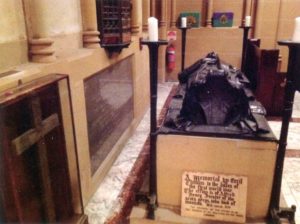 The plain wooden cross which is beside the entrance was given by King Edward VIII (then Prince of Wales) in 1926. It is one of the plain crosses placed over the graves of unknown soldiers in France.

Eleven pieces of artwork were commissioned to enhance this Chapel. It was fortunate that the world famous Australian metalsmith, William Mark, returned to Australia just at the time the Chapel was being built. He took more than two years to fulfil the order for this Chapel. The pieces include the sanctuary lamp and the Christus on the southern wall, the cross and candlesticks for the altar, the gold chalice and paten and the Book of Gold. All eleven pieces are still in the Cathedral. 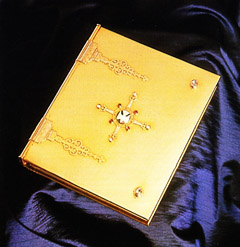 The Book of Gold, which is permanently on display in the South Ambulatory, is a work of rare beauty. It is the Book of Remembrance for the Hunter Valley and on its pages, which are hand-painted and arranged by Parish, are listed the names of all the men of the Hunter Valley who lost their lives in the Great War. The covers of the book are plates of gold and the front cover is decorated with an enamel of the Dove of Peace and with precious stones.

The gold chalice and paten are treasures of rare beauty and are also on display in the South Ambulatory. To obtain these treasures, the ladies of the Hunter Valley and beyond gave their jewellery which was sacrificed to make these beautiful objects. They display to perfection the art of a creative metalsmith. Although the Great War is now so far behind us, the Chapel remains a tangible expression of the debt of gratitude owed to the young men of the time who gave their lives for their country. It is fitting that the Chapel is in constant daily use to this day.