The Cathedral Church of Christ the King, Newcastle, is one of the most impressive ecclesiastical monuments in this country, situated on a site where it dominates much of the city and harbour. The foundation stone of the current building was laid in 1892 and after disputes with the architect and cash flow problems, the incomplete Cathedral was dedicated in 1902.

In 1906, the organ which forms the basis of the current instrument was installed in the Cathedral. Built by Norman and Beard to a specification designed by Sir George Martin (Organist, St Paul’s Cathedral, London), this organ contained 3 manuals and pedal, 30 stops and a prompt pneumatic action. At the time, it was considered to be one of the finest instruments that this English firm had produced, although until the completion of the building, the full powers of the organ would remain unknown. 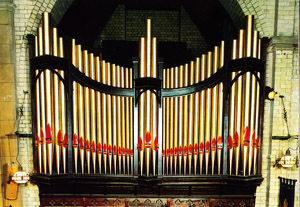 In 1912 the chancel roof was raised, and the organ lifted to its present loft position. In 1922-23, the Cathedral Chapter engaged TC Edwards of Sydney to enlarge (rather unsuccessfully) the organ to 4 manuals and 38 stops, provide a transept case, and relocate the console to floor level under the organ chamber. Unfortunately, owing to a dispute with the insurance underwriters, the planned electric action could not be used and hence the original pneumatic action was extended. The combination of these latter two points resulted in a sluggish action and a near impossible situation to ascertain a good balance between organ and voice from the console.

Due to the relative lack of success of the 1923 rebuild by TC Edwards and the atmosphere of Newcastle from where the organ drew its air supply (containing, according to Keith Noake, a “grand mixture of suspended small solids and salty moisture”) the organ had fallen into a poor state by the 1950s. It was finally decided by the Diocesan Synod to bear the costs of rebuilding the instrument, with a proportionate share of funding coming from the Cathedral community. This rebuild was carried out by the JW Walker and sons of Ruislip, Middlesex, and completed in 1963. This rebuild restored the integrity of the instrument to that of the original Norman and Beard instrument, removing and relocating many of the additions made by TC Edwards. Along with some added ranks by Edwards, some original Norman and Beard ranks were removed or relocated to different divisions because they were of indifferent quality or were better replaced in the interests of the overall scheme. Overall, there was a new brightness in the upperwork of the instrument, without losing the integrity of the romantic nature of the Norman and Beard instrument. The voicing of this work was carried out by the noted voicer, Walter Goodey, and Arthur Jones carried out the erection and finishing of the instrument.

On December 28, 1989, the City of Newcastle suffered an earthquake measuring at a magnitude of 5.6 on the Richter Scale. Christ Church Cathedral was greatly affected and as part of the rebuilding of the Cathedral, the organ and console was refurbished and enlarged by Peter D.G. Jewkes and Co. of Sydney. This refurbishment included the addition of several stops, the installation of a humidifying unit, and the provision for a new solid-state combination action and sequencer. The work was completed in 1998, with the new metal pipework coming from P&S Organ Supply, England, and the wooden Stopped Diapason from George Stephens of Adelaide. All work was carried out to exact Norman and Beard scales to maintain the integrity of this fine instrument.

Most recently, two digital 32’ ranks were added to the pedal division by Walker Technical of Pennsylvania, USA. The addition of these ranks takes the organ to 60 speaking stops, and completes this stage of the organ’s history, as intended from the 1998 refurbishment.

Further information and a complete specification of the Organ may be found at: http://www.ohta.org.au/confs/Sydney/CHRISTCATHEDRAL.html

Information taken from the website of the Organ Historical Trust of Australia (http://www.ohta.org.au/confs/Sydney/CHRISTCATHEDRAL.html), the brochure, The Grand Organ 1906 (to mark the installation of the Norman and Beard Organ) and the article, The Organ in Newcastle Cathedral, New South Wales, by Keith Noake (The Organist, Vol XLIII, No 171, January 1964).